"In The Mouth of Madness" is My New Favorite Movie 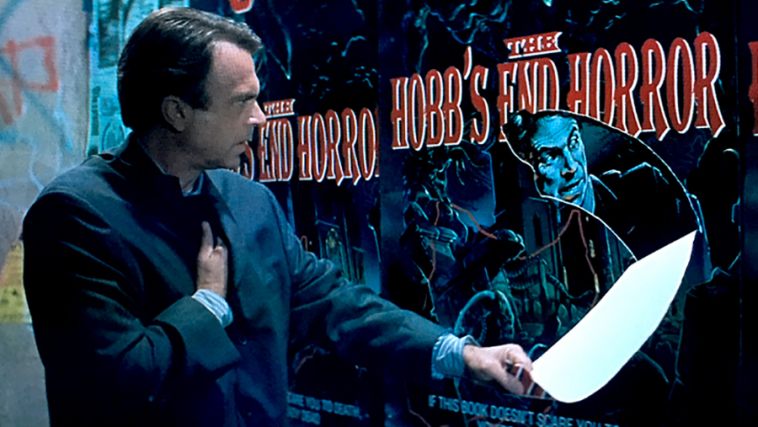 Do You read Sutter Cane?

Lovecraftian horror, a mad author, psychological thrills and the cinematography of John Carpenter. These are all things I like a lot. So much so that I'm honestly a bit shocked it took so long for me to see this thing. But after Red Letter Media did a video on it, I finally decided to rent it on Youtube and see how it was. And honestly? It rocked my socks.

Admittedly, much of that boils down to personal interests. I've been a diehard Lovecraft fan since my edgelord teenage years, I love horror movies and I'm a writer. Movies about books in general are also something I really, really like, because I kind of like books. And while I'm not the biggest Stephen King fan (barring Misery and Salem's Lot), I really dig the old-school aesthetic of his 80's covers.  Also, while it never directly name-drops the Mythos proper, the influence of Lovecraft's work can be felt in the themes, references and characterization that run throughout the whole movie. It's cosmic horror done right, which is a damned rarity outside of books and gaming for some weird reason.

That said, there's some hiccups here and there, such as a slow third act and a major character who ends up becoming little more than a spooky prop towards the middle of the film. It also has a somewhat cheesy atmosphere that attempts to meld Lovecraft's darksome dreams with King's tamer brand of horror. And while I'm glad to say it leans far more on the former than the latter, it lacks the gothic austerity and breathless dread H.P.'s best material has. In fact, I'd go as far as to say that while the soul of Madness is thoroughly Lovecraft, the tone and aesthetics often borrow more from Stephen King films like Christine and the 90's IT. And while I really dug it, it's by no means a replacement for a proper Call of Cthulhu or Whisperer in Darkness adaptation. Also at times, I almost felt a bit of Tales from the Crypt in there too, which I don't mind at all given I've pretty much watched every episode of that.

If you like all that stuff, you're in for a ride. But if the thought of cheese on your horror hotdog makes you retch, maybe skip this one. I thought it was a damn good psychological thriller, but I know a lot of people think this movie's garbo, so I think you kind of need to be a certain type of viewer to really like it. The kind who watched TNT Monstervision, or eagerly awaits James Rolfe's Monster Madness around Halloween.

Also you get to see Sam Neill have an existential freakout over the color blue. So you know, there's that.

I've purposely avoided mentioning any characters or major plot threads, because it's best to go into this thing blind. If cheesy horror's not for you then...I dunno, maybe give Snowpiercer a watch? Never seen that one, so I've no idea how good a suggestion that was. But hey, if you do like cheesy John Carpenter horror flicks, Lovecraft and King, then I thoroughly recommend it. 4/4 stars from me.
at July 12, 2019

Email ThisBlogThis!Share to TwitterShare to FacebookShare to Pinterest
Labels: horror, In The Mouth of Madness, movie, weird fiction