In Defense of the Fantasy Genre: Don't Apologize for the Mythic 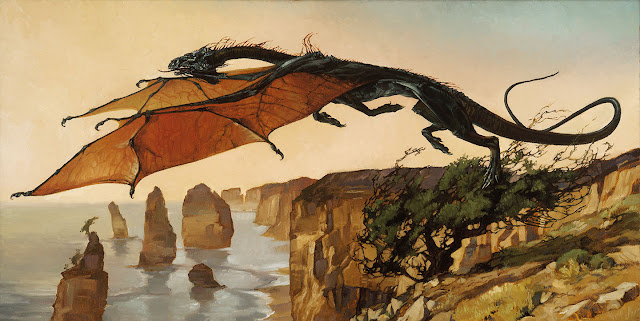 So Booktuber and all around awesome guy Daniel Greene (who I've previously interviewed) released a video echoing some opinions I've held for awhile. I'd strongly encourage you check it out yourself, but the basic gist is  as follows. Despite the huge rise in acceptance of the SFF genre, there's this obnoxious insistence in the mainstream that fantasy "isn't serious fiction" and that serious works of the genre succeed in spite of, and not because of their genre.

The example he gives is the upcoming Netflix Witcher series, which the VFX superviser claimed "leaned more towards horror than fantasy." In the interview with Games Radar, Julian Parry claimed:

"...We're definitely taking the fantasy out. I can honestly say we're not fantastical. I mean, it's fantastical but in a grounded horror sense. For example, with Striga (a woman cursed to live as a monster) that's one gnarly-looking thing. That's very unpleasant!"

...Which of course, implies that horror isn't somehow fantastical, and that stuff like Van Helsing or Friday the 13th are more "grounded." Or at least, that's what I got from it. Elsewhere, you'll often hear people praise series like Game of Thrones for being "more of a historical drama," or even that fantasy fiction in general is just narrow and childish compared to Sci-fi. Which, if you know your literary history, is quite the statement given the latter's hammy pulp roots. Even the recent surge of D&D podcasts (Critical Role, Adventure Zone, etc) don't exactly take their settings seriously, as if doing so would somehow be sillier.

Now before I go further, let me stress that I love ALL these genres almost equally. To me, Fantasy, Sci-fi and Horror are canvases upon which all kinds of stories can be told. There's tropey but fun fare, more "serious" and experimental works, emerging new genres, and absolute tripe like the Gor series.

But Fantasy in particular, is a genre whose importance lies in the Mythic. While Sci-fi examines science and our relationship to it, Fantasy similarly explores our myths, religions and culture. It's a wide net which encompasses everything from alternate history to the weird and dreamlike. Most importantly, it serves to either enforce or deconstruct our cultural archetypes, asking questions like what it truly means to be heroic, or what defines us as human in a world we can't fully comprehend. It also serves as a gateway to the past, allowing us to examine the good and ill of the past in a speculative capacity. More importantly, it allows us to carry the torch of our ancestral myths and legends into the modern age, re-interpreting and remixing them before passing them on to the next generation of readers and storytellers.

Would it be fair to call the Bagvad Gita, Journey to the West or Song of Roland narrow and childish? Few if any would claim so, yet that's precisely the sort of storytelling people think of when they say fantasy. Even the most cliche of Dungeons and Dragons staples have deep roots stretching across multiple cultures and traditions. And just like Sci-fi, it's not just limited to those tropes. Pulp fantasy, weird fantasy, grimdark, slipstream, magical realism, fantasy of manners and even literary all diverge from the standard settings and themes commonly assigned to the genre. Which isn't to say every work of fantasy has merit. But to say the gene itself is lacking, or requires another genre to "legitimize" it  really isn't fair. So why then, does this misconception persist?

There's a lot of reasons, but a few stuck out to me in particular. On the more general side, I think most people (sadly) associate Sci-fi and Fantasy with blockbuster movies instead of literature. And for whatever reason, Science Fiction took hold of the silver screen in a way Fantasy never could. Blade Runner, E.T., Close Encounters, Star Wars, 2001: A Space Odyssey and the Marvel Cinematic Universe are but a small portion of successful and well-loved science fiction films. But fantasy? Ask anyone on the street what their favorite fantasy movie is, and their choices will either be Harry Potter, Lord of the Rings, or a Disney Princess movie. And while it pains me to say it, most people would rather watch a movie than read a book, especially large, multi-volume epics like The Wheel of Time.

Less obvious but still notable is the assertion that Fantasy is a "reactionary" genre. One which holds onto ugly, morally regressive ideas and brings nothing new to the table. To these charming sorts, I have but one thing to say. If you think standing up to evil, facing tyrants and exploring our shared human heritage is "reactionary," then you can keep your "progress." That being said, not all these sorts of criticisms are without some merit, and there's certainly old ideas ideas we can do without (Monarchy and slavery being two examples). It's fortunate then, that Fantasy's as adept at critiquing the past as it is romanticizing it. Michael Moorcock's fiction is a scathing critique of Tolkien's traditionalism, and other authors like Ursula LeGuin is another author who's critiqued various ideas through the lends of fantasy. I've personally used Fantasy as a means of exploring the horrors of unchecked power and dismantling the trope of the "noble king" in shorts I've written.

Like all genres, there's room here for all kinds of storytelling, ranging from the most hackneyed, awful stuff imaginable, to the greatest works of literature. The fact that the sword and planet subgenre of science fiction contains both Book of the New Sun (arguably the best work of SFF ever written) and the aforementioned Gor novels (arguably some of the worst) proves there's no such thing as a "good" or "bad" category. And even if fantasy were equivalent to crayons while other genres were oil paints, amazing works of art have been made with crayons. So I think it's safe to say that it's not Fantasy itself that's a "Problem," but how we perceive it in the culture. There's so much more to the genre than Tolkien pastiche and Disney movies. And if we were broaden our horizons and recognize the diverse array of mythic influences out there, perhaps that perception could change over time.