Review: Along the Razor's Edge by Rob J. Hayes 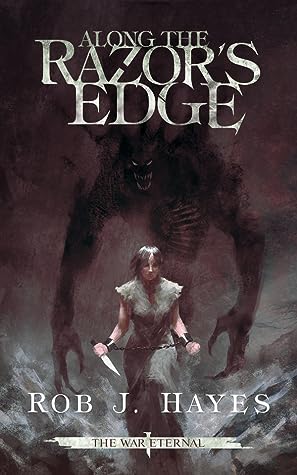 This book is fantasic. It belongs in that category of fantasy books you'd recommend even to people who say they hate  fantasy "because it's just elves and sh*t." If you have one of those at work, or in your family or anywhere else where they snicker at your bookshelf or Kindle list, you just give ''em one of these. Because for the life of me I cannot think of the last book where fantasy themes and raw, human emotional drama were this intertwined. You simply couldn't tell a story with characters like this without magic. Yet at the same time, none of this feels generic or cribbed from the broader fantasy landscape. One or two terms are shared, but like Mistborn, it feels like its own thing. And that's something I think new and seasoned readers alike will really appreciate here.

The story itself follows Eska, a young Sourcerer (the spelling's important) who's trapped in a subterranean prison complex known as The Pit. Though she had magical powers at one point, her Sources (see?) were removed, rendering her abilities inert. However, as she's the narrator, we also get gimpses of what she was able to do, as well as what she might do in the future. And while I won't spoil any of that, it's fairly safe to say she's both slightly unreliable and probably done some really wild stuff. And the way the chapters shift between the story at hand and memories of the past creates an almost GRRM multiple POV style. Except the different "characters" are all Eska, just at different points in her life. The characters feel raw and visceral. There's no glossing over some very screwed-up actions, thoughts and events. At the same time, this isn't cheap, Halloween-store "just add blood and guts and cynicism" grimdark. Rather, it's an exploration into a character's dark psyche, the relationship between her powers and her psychology, and the dark, almost Lovecraftian ways that manifests in the narrative.

And honestly? It hits a lot of the same buttons Berserk did for me, in that it feels like a typical dark fantasy story and then goes to some REALLY interesting character-driven places. And while I'm not quite sure it's Berserk-tier storytelling yet, it's off to a really good start and could easily get there if the ending's anything to go by. And if you know me, that's HIGH praise.

So yeah, pre-order this one.

Full disclaimer: The ARC was provided to me by Rob for beta reading purposes. I decided to review it further on here because it's really that good.